Roman Reigns rose to prominence in WWE in 2014. Since then, he has established himself as a genuine superstar. His six-foot-three 264-pound frame, packed with dense muscle, cowers competitors.

In this article, we lift the lid on Roman Reigns’ training, nutrition, and supplement routine to reveal how he built his amazing physique.

Leati Joseph “Joe” Anoaʻi, also known by his stage name Roman Reigns, was born on May 25, 1985, in Pensacola, Florida. His heritage is Samoan, Italian, English, and Arbëreshë, and he comes from a family of pro wrestlers, with his father and uncle being ring veterans. Through his Samoan lineage, he is also related to many Island wrestlers, including Dwayne “The Rock” Johnson.

Joe enjoyed a successful football career in high school and was named defensive player of the year in his senior year. He then attended the Georgia Institute of Technology, playing for the Yellow Jackets Football team. In 2006, he was named to the All-Atlantic Coast Conference.

He was released in November of 2008 and subsequently retired from professional football.

In 2010, Anoa’i signed a contract with the WWE. He made his TV debut in August of that year under the stage name Roman Leakee. In 2012, following the WWE’s rebranding of FCW to NXT, he reappeared with the new name of Roman Reigns as a villain.

By 2014, Roman had risen to main event status and headlined the show. He was defeated that year for the WWE Heavyweight title by John Cena. The following year he defeated Triple H to claim the heavyweight title for the first time.

At the time of this article’s publication, Roman Reigns has won the WWE heavyweight title six times.

As you might expect, Roman Reigns’ diet is built around a high protein intake. He needs it to maintain his 264-pound structure, as well as to build more muscle mass. He consumes 1,200 calories through protein each day.

Roman breaks his macros down to the following ratio:

He consumes around 3,500 calories each day, spread out over six meals and three hours apart.

Due to leukemia, Roman has to be selective in the types of proteins that he eats. Crabs, red meat, and shellfish are off-limits for him. Instead, he goes for bodybuilding staples such as chicken, wild-caught fish, red meat, bacon, and sausages.

Roman knows that he needs a decent intake of carbs to fuel his body and release the insulin that drives nutrients into his muscle cells. To get those carbs, he eats a lot of vegetables, including sweet potatoes, broccoli, spinach, asparagus, and cauliflower.

Roman gets his fats from such healthy options as avocadoes, walnuts, almonds, coconut oil, and almond butter.

Here is a breakdown of an average day’s eating for Roman Reigns:

Roman loves nothing more than to lose himself in hard and heavy workout sessions. This allows him to develop the strength and muscle mass he needs to bring his imposing physique to the ring.

At the same time, Roman realizes that he needs to be constantly working on his speed and agility through cardio. Without it, he won’t be able to sustain his momentum in the ring right through to the victory bell.

Roman knows that his legs are the key to success in the ring. If his legs go, he won’t be able to remain on his feet. To develop powerful wheels, he trains his legs three times per week. 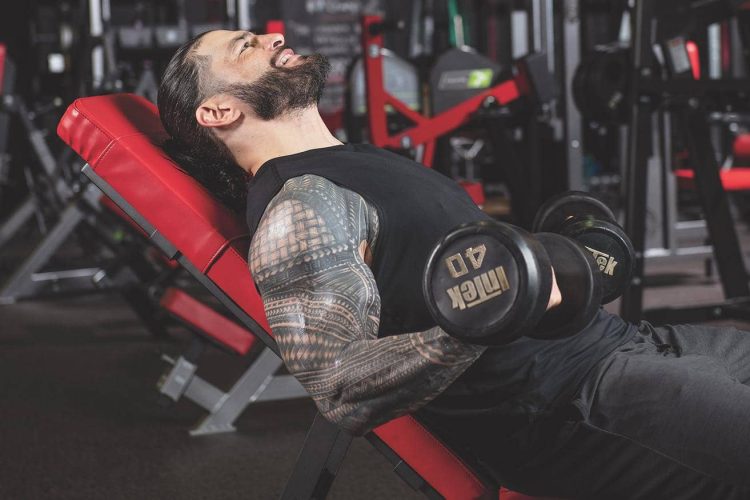 Here are half a dozen training principles that underscore the Roman Reigns’ way of working out:

Below is the training program Reigns uses to stay in the same shape throughout the year:

Roman Reigns has a jam-packed schedule. He trains five days a week, and then, on the weekends (and the odd weekday), he pushes his body to insane levels while competing in the WWE ring. To supply the energy to meet those demands, he relies on supplements along with his high-calorie diet.

Roman drinks protein shakes twice per day. The first shake is after his workout and contains a 50/50 blend of protein and carbohydrates. The carbs are needed to replenish the glycogen he spent during the training session.

Roman’s second protein shake makes up his mid-afternoon snack. In each of his shakes, he adds the following:

Roman takes a pre-workout before every workout. He doesn’t have a favorite brand but makes sure that whatever product he takes contains the following workout-boosting ingredients:

Roman Reigns stands at the pinnacle of the WWE and has done so for a long time. You now know the hard work that has gone into his success. If you are an experienced trainer, feel free to follow Roman’s program and eating plan. If you can bring the same intensity as him, you’re likely to be rewarded with some serious muscle and strength growth.

PowerBlock adjustable dumbbells are on sale at Woot! for $300